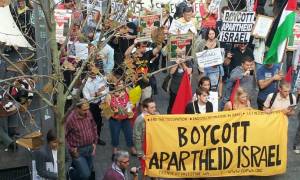 This week marks the tenth anniversary of the BDS sponsored Israel Apartheid Week, and makes its way onto over 200 campuses. The week features various protests against Israel and brings famous pro-BDS speakers across campuses. It offers seminars educating on the “racist” state of Israel and its apartheid practices, and preaches..of course the principles of the BDS movement; that Israel should get boycotted until it ends its occupation of Palestine.

Take note, as its important to see that this movement and the Israel Apartheid Week isn’t meant to bring to light any promotion of peace with Israel and Palestinians, but instead seeks to solidify that the state of Israel should not exist at all, and that when they mean “occupying”, they are talking about the entire state. The most important thing to point out about this week is that in light of the movement’s success this past decade garnering attention worldwide, the international media fixates its attention to this week in lieu through supporting articles. They point out the shortcomings of the Israeli state and the injustices’ that the Palestinians face on a daily basis, including the Gaza Strip.

Although the movement likes to portray itself as incredibly successful through a video the BDS advocates put out this week, for example through the ASA achievement, it still fails to carry out its mission worldwide. There are many Pro-Israel groups who have strategized and countered  this week by creating their own seminars and training advocates to educate the students population from an Israeli perspective. Not to mention that hundreds of schools have backed off their support for the ASA and their decision to academically boycott Israel.

It’s amazing to what end BDS advocates will keep lying in order to achieve what they really want – to bring about the end of the Israeli occupation by bringing down the Israeli state through international boycott. The BDS movement and Israel Apartheid Week only manages to do this by bringing out the extremes, for example antisemitic speakers and spreading false propaganda.