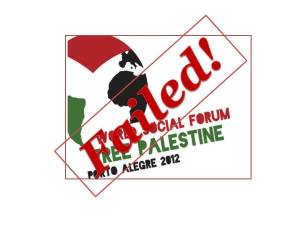 George Orwell famously said :’ the most effective way to destroy people is to deny and obliterate their own understanding of their history.” This past weekend [28 November 2012- 1 December ], hundreds of BDS campaigners were suppose to gather in Porto Alegre in Brazil to put their heads together and to brainstorm tactics to develop a strategy to intensify the global BDS campaign against Israel. The only problem was that the attendance numbers were low. Also no high level officials of the Brazilian government were prepared to show up to endorse the proceedings.

It’s a shame that the BDS movement hijacked the agenda of the World Social Forum to endorse their biased and discriminatory policies towards Israel. The Worlds History books cannot be rewritten by a couple of panels, conferences, presentations, workshops nor seminars.

The call for the Free Palestine World Social Forum describes it as “an historic opportunity for people from all over the world to stand up where governments have failed.” The only thing that the Free Palestine World Social Forum did manage to change was the realization that the BDS call by civil society on a governmental level has failed miserably.

The irony is if the real intention of the BDS movement was to help uplift the Palestinian people , they would of hosted the conference in the Palestinian territories and bring tourism to the people they purport to help. If civil society would like to advance the peace process, it be more conducive to create opportunities for dialogue between the two sides in the conflict. The only way civil society can be written in the annals of history is if they are prepared to facilitate dialogue and bring the two sides to the negotiating table.

4 thoughts on “The Free Palestine World Social Forum did not change the worlds History books.”