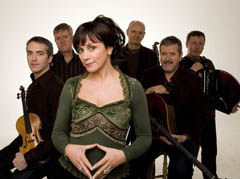 Two Irish bands, Dervish and Fullset, last week canceled their June concerts in Israel, citing the cultural boycott policy adopted by some members of Ireland’s artistic community. Their decision to finally yield was a clear result of an orchestrated campaign from the Ireland Palestine Solidarity Campaign (IPSC), characterized by a torrent of “negativity and venom” on Facebook and Twitter and a caution, that the band would lose all credibility if they travelled.

“Cyber bullying” is how this campaign was described by Irish Justice Minister Alan Shatter. In comments reported by Ireland’s Sunday Independent he claimed that the IPSG staged a “concerted” campaign to stop the series of three concerts by the traditional music group and slammed the actions of the IPSG and their attempts to promote a boycott of Israel by Irish acts.

“The invitation to Dervish to perform in Israel came from a fellow musician who worked to bridge divides between people through music for much of his life and the objective of the concerts was ‘to promote love between two divided communities.’

“If the IPSC were in any way interested in promoting peace and reconciliation in a troubled part of the world they would recognize the value of cultural and artistic exchanges and the contribution such events make to fostering understanding and tolerance.”

Shatter also attacked the motives of the IPSC. He added:

“Unfortunately, IPSC’s interest is not in peace and reconciliation, their appeal to human rights rings hollow.

“It is particularly extraordinary that the orchestrated campaign targeted at Dervish occurred at a time when thousands have lost their lives in Syria and the IPSG have remained silent about the crimes against humanity being committed there.”