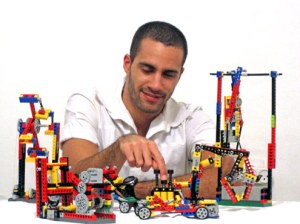 Amir Asor, 26, a young Israeli entrepreneur from Rehovot just won the title of Youth Business International (YBI) Entrepreneur of the Year award in London. The president of the YBI is Prince Charles. The business, which Asor set up in 2007 and now employs 25 people, teaches schoolchildren complex principles through the simple application of Lego models – and so far this year more than 2500 children via 130 educational centers across Israel have received the tuition. Asor established the business with the help of a subsidized loan he received from the Keren Shemesh Fund of the Edmond J. Safra Philanthropic Foundation after he was rejected by various banks. The kit’s distribution began in 2008 with 100 children. Today, at least 2,200 students at 130 education centers in Israel take part in classes that make use of the kits supplied by Asor’s company which is called: The Asor Group – Young Entrepreneurs. The business intends to expand its product distribution and sell them to additional countries within the next few months.